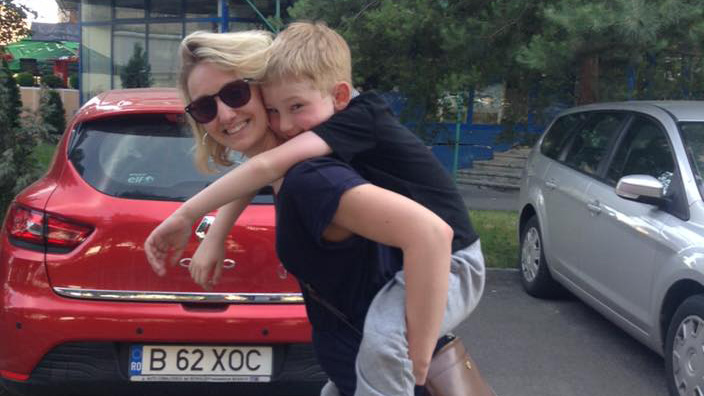 Many years ago I sat in a church and heard an older couple share about this place I knew nothing about called Romania. My only recollection of this place is that it was somewhere that people sent knitted blankets to and they had many orphanages.

I heard how they would go and run kids clubs, help in orphanages and speak in churches. When I was 8, I can clearly remember saying that one day, I’ll go there. My life went on for another 27 years until I had the opportunity with Mission: Europe to travel to Romania. On that trip, I remember the statement I had made all those years previously – I’ll go there one day. I have two boys, one called Noah who is a similar age to me when I first heard of Romania. He was eager to come with me on my second trip. A year later, off we went ……

Travelling with children isn’t always fun especially when that child has a sensory disorder where loud bangs, strange foods or new people can cause meltdowns. As a mum, I worried but I knew God had gone before me… Noah and I travelled with one other member of the church, Niha, who was a teacher and who totally understood Noah. The three of us flew from London to Debrecen, Hungary then drove through the night into Oradea, Romania before having three hours sleep, and getting up early to help at a homeless feeding program. Noah coped with all this so well. There was one particular moment where God came through for him. One evening, we left his games console at a restaurant and figured we wouldn’t get it back. Noah whispered a little prayer. Miraculously, 5 hours later, through a series of crazy events, we did and Noah remembered God heard his prayer about his games console.

Watching Noah on this trip was nothing more than heartwarming to a mother’s soul. My son saw a child who needed food and, without question, gave his lunch to the child. Another day, whilst we were helping at a Funday, he had asked for an ice cream. I gave him the money without a second thought. He then passed the ice cream to the child next to him again looking and saying “I’ll get one another time. He sat wide eyed in homes as I held newborn babies and prayed with families. As we were leaving that particular village, he turned to me and said “Mummy, this is what we do. We love and care because we can”. My son had seen first hand what I loved to do and in turn, now shares that same bond with me. This may well be the greatest trip to Romania I’ll ever go on.